Mise-en-scène - Lord of the Flies 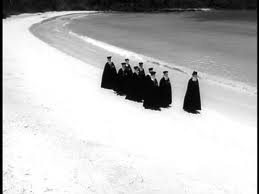 The Choir
Ralph and Piggy first encounter the choir boys marching across the beach in an orderly, authoritative formation led by head boy and chorister Jack Merridew. The Eden-esque paradise of the golden sands and tranquil waters is sharply polarised against the steely blacks of there uniforms. There is a jar between the splendorous nature of the still and the almost forceful appearance of there civilised uniforms. There is a true sense that civilised man has arrived upon this exotic island.

Beyond the aesthetic juxtaposition, it is very clear that Jack is a leader. He has a position of power and authority. He is literally ahead and apart from the other boys. This represents Jack fairly well. He is a lone wolf, enthused with the authority bestowed upon him by the civilised world. If the Island is a microcosm of the wider world, then Jack is desperately clinging to the perks and privileges of his esteemed status. His rage, his cruelty and his barbarism stem from his deeply rooted insecurity that his authority will be overthrown and unrecognised, even usurped.

The boys following Jack are passive and submissive, reciting a choir song in unison as they march. They represent the danger of blindly following, the terrible repercussions of the mob mentality that develops and the ways in which a benevolent group of Godly boys can quickly regress into savages so long as a hierarchal power system is imposed and enforced.

The uniforms, the choir song and the march all convey a sense of majority rule and synchronicity. 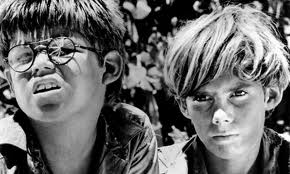 Piggy and Ralph
Ralph is charismatic, benevolent and a natural leader. He is kind, fair and just. As the protagonist of the novel, Ralph is instantaneously selected to be the leader by the boys. His natural air of authority, athletic build and charming approach, bind the boys to him. Ralph is the embodiment of the civilised, well-raised boy, lending his breeding, manners and productivity to the ramshackle, chaotic farcical formation that is the Island.
Ralph introduces the concept of assemblies and meetings, commanding the boys with the conch. Ralph consistently prioritises the importance of shelter and rescue, whilst the other boys focus on the instant gratification and immediate pleasures of play and consumption.
Ralph is often compared to the ego of man, whilst Jack is perceived as the id. Piggy by contrast represents intelligence, science and rational thought. Piggy lacks the physical build and easy charm of Ralph, and he also lacks the power hungry thirst and lunge for power that enables Jack to be so successful. What he does possess is a clear, calm mind, a mind that can establish between fact and fiction. Piggy immediately understands that there is no monster on the island.
Bound by his physical flaws and inabilities, Piggy is heavily reliant upon the civilised world and unable to function in this primal state. Ralph and Piggy form a duo dependent on one another for what the other lacks. Ralph enables Piggy to be tolerated by the group, whilst Piggy practically serves as Ralph's wingman or PR, encouraging his leadership and promoting his ideologies and values.
The breaking of Piggy's glasses (as pictured) reveals the boys hostility towards the intellect, rationality and reason. The boys are not in school anymore and simply do not respond to Piggy's common sense. The crack in the glasses represents the waning of Piggy's already very ropey influence. It also hints that another, larger 'crack' is to come. 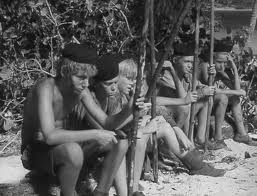 Assembly
Ralph calls a meeting, but gradually, the choir boys begin to lose interest and separate into a new group; the Hunters. We can track the regression of the hunters from choir boys into savages by the shedding of there uniforms. Initially attired head to toe in black, here they retain only there caps. Perhaps we can infer that there is still some reason and humanity within there heads. Otherwise, they are completely stripped of clothing, slowly becoming animalised and less civilised. They no longer feel the need to wear a uniform to establish authority.
They are also armed with staffs. Again, there is a sense of passive singularity. Jack and Roger are the only two of the group to have established personalities. The remaining hunters are intrinsically similar and undefinable. They function solely as a mass.
The posture also represents dysentery in the ranks. Jack looks both vengeful and disinterested whilst the rest of the boys hold poses ranging from boredom, disinterest, sullenness and rebellion. There loyalty lies elsewhere. There is a great repressed tension here. 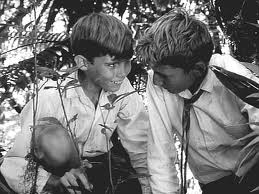 Ralph and Jack
Ralph and Jack have an intriguing relationship. They are both recognised as authority figures, and as such, despite there fundamental differences, they have a grudging respect for one another.
Ralph is inherently more humane, compassionate and pleasant whilst Jack is hot headed, bullish and impulsive. When the two are together, there is an easy camaraderie about them. Here they conspire, both dressed in there school attire, as equals. Neither boy is above the other. Later, this relationship is to deteriorate. 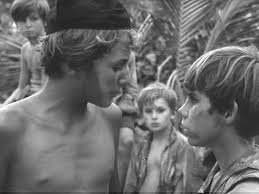 Leader V Leader
The difference between the two pictures marks the deterioration of the boys relationship. Whereas before they were seated side by side, Jack is now at an imposing height whilst Ralph stands lower, indicating that Jack has officially usurped Ralph's leadership.
Jack is topless (animalised) whilst Ralph is clothed (civilised). Jack still wears his cap, but this is the only lingering part of his attire.
Jack looks hostile and tempestuous whilst Ralph, good-hearted and somewhat naïve, grudgingly acknowledges his fading star. 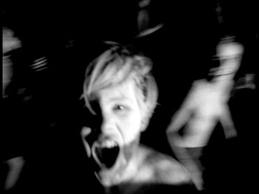 Wild Thing
The boys dance around a camp fire. Even Ralph finds himself mysteriously hypnotised and pulled into the compulsive acts of dancing, chanting and fighting. These tribal behaviours reveal the animalism within the boys, for there is a temptation and a pleasure to be had in these simplistic, barbaric regressions.
On the night of Simon's murder, the boys play fighting transforms into sheer insanity. Mimicking animals, the boy above is no longer recognisable as a civilised boy. His hair is tousled, he is nude and painted. The still is both eerie and intimate, wild and cramped. The boys are making a departure from one way of being and emerging into a more primitive manner. They are shedding there civilised facades to reveal what man is beneath. 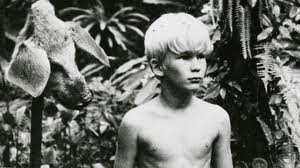 Simon and the Lord of the Flies
Simon is rejected by the group immediately. Intuitive, sensitive and spiritual, Simon is prone to faints and fits, and yet he has a deeper understanding beyond his years that the boys are unable to process. Even Ralph and Piggy, his close affiliates, do not fully understand him.
Simon is the lone communicator of the truth of the Island. He understands that there is no beast or monster, the evil of the Island exists within man and is not external. The fear they possess is really fear of themselves displaced onto an unknown other.
Here, Simon stands with the sows head. In a hypnotic, hallucinogenic state, Simon hears the pig reveal the truth. When Simon attempts to pass his message onto the boys, he is murdered. Simon has often been professed to be a Christ like figure, a profit bringing a message that the others refuse to listen to. 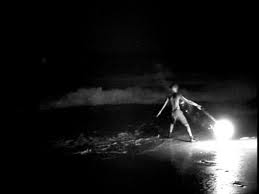 Burn, baby, burn!
Fire is a powerful image in the film. It indicates reckless destruction. Fire, initially used as a beacon to warm communities and heat food, is no longer contained and eventually burns down the Island and leads to the boys being rescued. Here, we can see the beginning of the reckless use of fire. Before a clouded sky and a calm sea, the third of the fourth elements, fire, controlled by the boy, is swung about aimlessly. They lack the maturity to control there animalistic urges.
If fire represents enlightenment, action and aggression, we can see that the boys are slowly losing control of this element. Eventually, fire will lead to there undoing and there liberation. 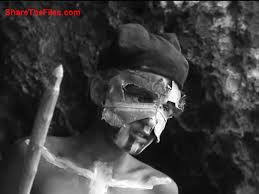 Jack, Unrecognisable
One of my favourite stills of Jack, he is now beyond recognisable. His face is hidden and masked enabling him to disconnect himself from the repugnant acts he has committed. He is concealed and hidden, as well as armed with his staff. The white paint on his chest almost looks like a crucifix, a gross parody and distant reminder of his former alliance. 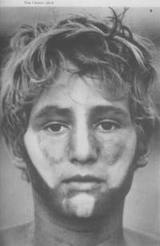 Jack Merridew
A full frontal still of Jack Merridew. His painted face looks haunting and dehumanised. He is disconnecting himself from his new persona as leader of the hunters. His ability to hold a direct gaze indicates the ease and comfort with which he operates whilst 'concealed'.
Posted by Unknown at 16:19