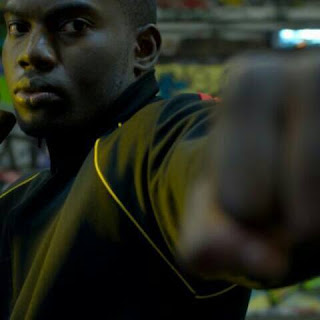 The term ‘tricking’ might conjure up images of magicians shuffling a deck of cards or women dressed in fire-truck red dresses huddled at the roadside but the term is officially used to define a plethora of acrobatic and gymnastic moves including front flips, side flips and back flips.

Tricking always sounded to me like a niche interest, perhaps the exclusive goal of circus folk or the very flexible. It turns out a lot of people want to learn to trick and not just to improve their flexibility or physical efficiency. Some want to learn a new trick to add to dance routines or to jazz up winning post-fight stances but one of the key motivations, believe it or not, is to overcome fear.

Over on the Old Kent Road in Elephant and Castle at the Miami Health Club, 26 year old Jordan Moody is teaching his class to trick alongside Eugene Bus-Sam. A mixture of ages are assembled and throwing themselves into the warm up phase of the 2 hour class which takes places on Tuesdays, Thursdays and Saturdays.

The warm up stage changes per session at the whim of the instructors. Jordan understands that change is necessary to keep the mind engaged and the body adaptive. Once the class completes this preliminary phase, the composition of the room is altered so that the group can practice their moves. As I sit and watch all I can think is that they all make vaulting through the air look so easy. The vibe of the class is connective rather than competitive; the group feels supportive of one another, offering congratulatory high-fives and compliments once a person attempts and completes a trick.

It is this easy aura that makes the class so attractive to the students that frequent it for a fiver. Jordan is a magnetic trainer who is very involved with his class. The younger group are his All-Star team whilst the older group are given more independence. He’s also the master of conditioning, the process of preparing the body to perform tricks with a range of intensive stretches designed to optimise flexibility, fitness and stamina.

Having only learnt to trick a few years prior, Jordan came to his class when he and a friend taught flips for a pound, an endeavour which proved wildly successful. When a room became available, a former student of Jordan’s recommended that he go there to teach. Jordan views his class as part of a larger movement to help the somewhat lost younger generation channel their energy and intensity constructively. A key factor in Jordan’s movement is overcoming fear and there’s not much that you can’t do after throwing yourself head over heels!

You can see the trepidation on some of the student’s faces, the natural sense of fear that never fully goes away but then you see a smile break through the clouds; the smile of success, of conquering an age-old fear.

Jordan is adamant that his classes are for everyone; men, women, girls, boys (his oldest student was in their sixties), dancers, businessmen; anyone who wants to do something both unusual and empowering. As the class concludes for the day and I see the sweat drenched but smiling faces, it’s all too clear – these guys love this class.

Jordan and co are set to perform at this years Notting Hill Carnival. 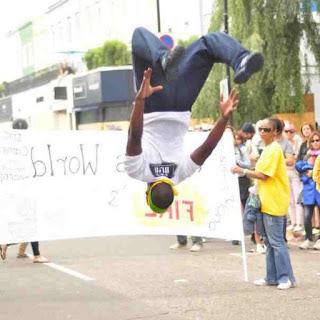