Some of my favourite Kiwi feasts...


I’ve always loved food. Food makes me happy. It’s a pleasure. I can’t eat when I’m stressed, anxious or afraid, but if I’m in high spirits, food, pretty much any food, is back on the menu. I was pretty fussy as a kid but nowadays there’s not much I won’t eat. I still have a few no no’s that are largely popular with most other people. I’m not fond of custard, shellfish, gravy, fatty bacon or mushrooms. There are probably a few other things I’m neglecting to mention as well.

One of the things I enjoy most about travelling and being abroad is the opportunity to try new food. In Vietnam, I was free to devour bowlfuls of pho and in Thailand I demolished platefuls of Pad Thai, the nation’s favourite dish. New Zealand is not notorious for its unusual cuisine. Much of its fare can be found at home but there is still the opportunity to eat at new restaurants and unheard of chains. Of course you get the regular culprits; KFC, Pizza Hut and McDonalds but there’s plenty of novelties to wrap your tongue around.

Here, in picture form are some of my favourite NZ eats and possibly part of the reason why I’ve gained around a stone since being here (it was worth it). 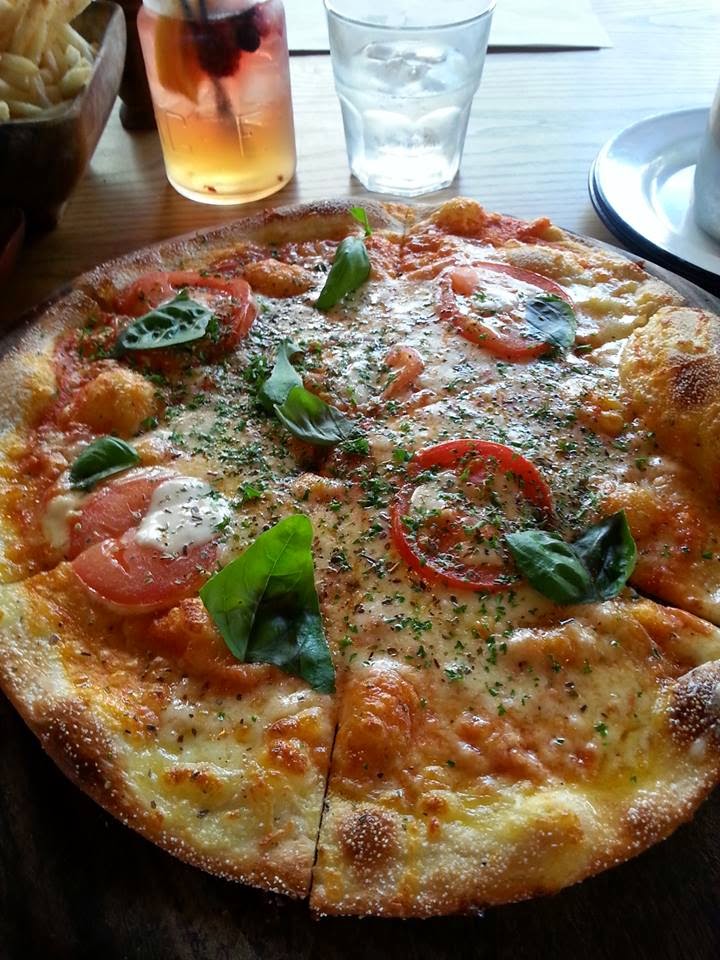 Blunderbuss pizzas are absolutely exquisite. As well as being MASSIVE (the photo doesn't quite do the pizza justice) and chock full of deliciousness, these pizzas are designed to be healthy alternatives to mainstream pizza chains. When you are someone who loves pizza as much as I, healthy pizza is an exciting prospect. 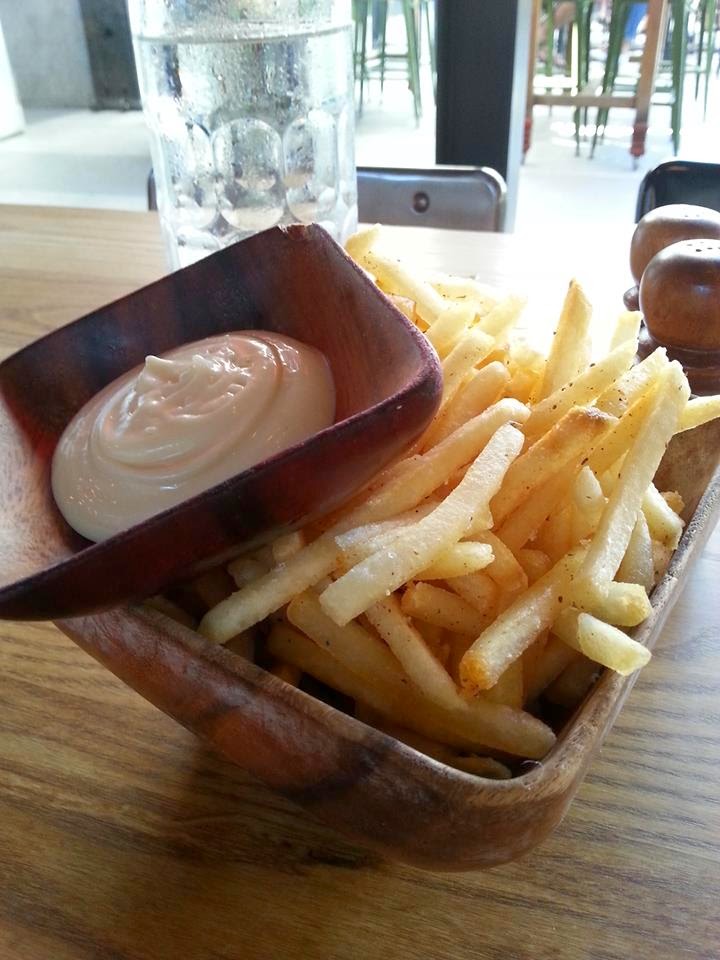 Shoestring fries also from Blunderbuss, seasoned with a generous sprinkle of salt and a yummy aioli condiment. Shoestring fries are so named because they are slimmer than thicker cut chips. 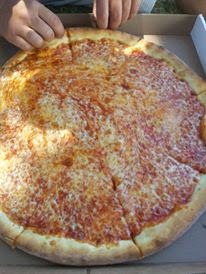 We took a Sal's pizza to the beach and absolutely annihilated it. 4 slices each, a monstrous amount of cheese and a thick crust; heaven. 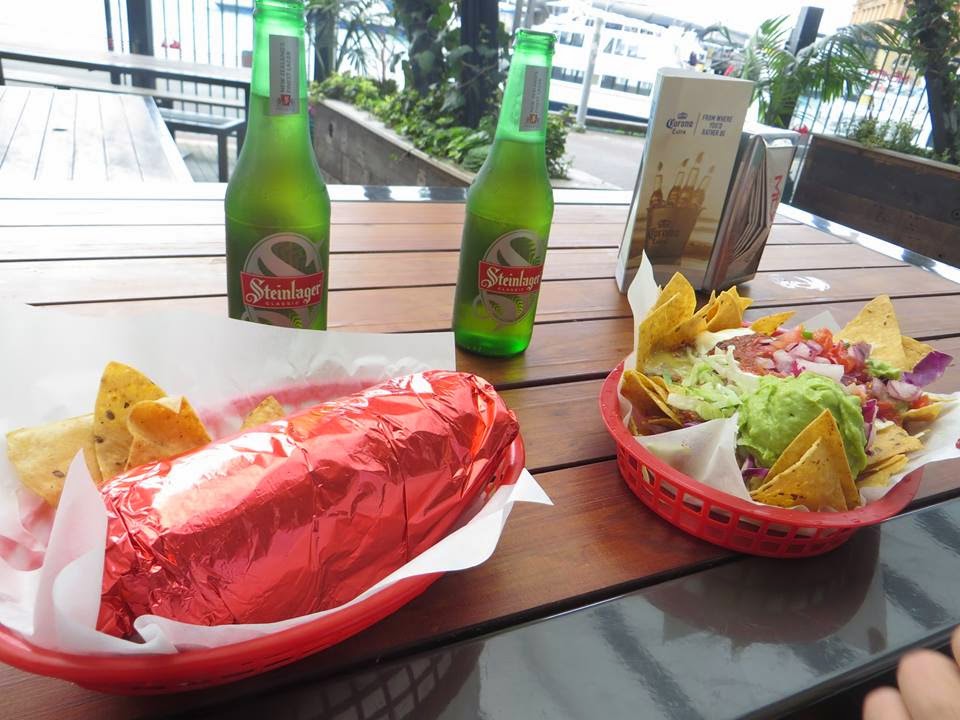 Mexicali burrito and nancho salad complete with Steinlagers of course. We ate these by Princess Wharf, near the Hilton Hotel in Auckland city over Christmas. 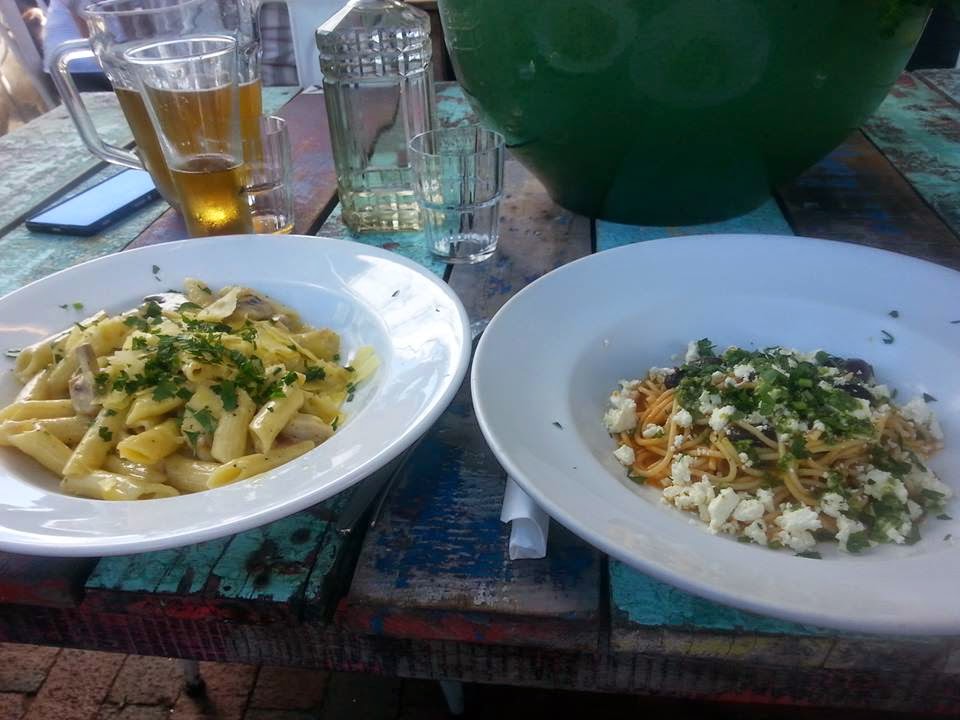 Corelli's, located in Devenport, is one of my favourite finds. It's very low key, quaint and the food is amazing. 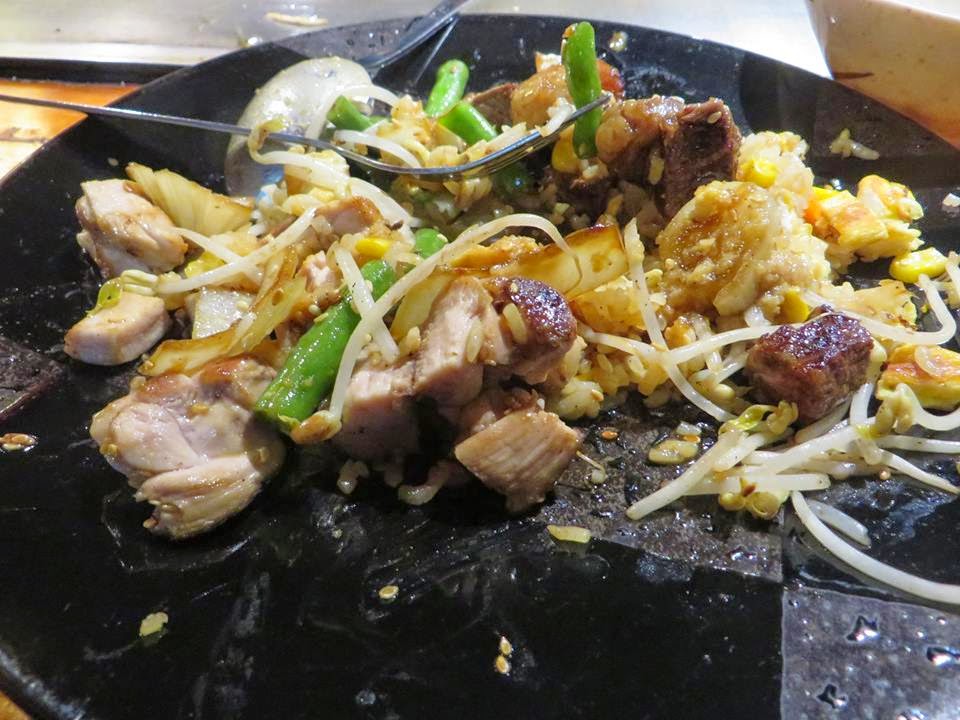 Daikoku is an internationally renowned Japanese restaurant where fresh food is made before your eyes with an interactive experience. Each table or party is provided with their own chef. 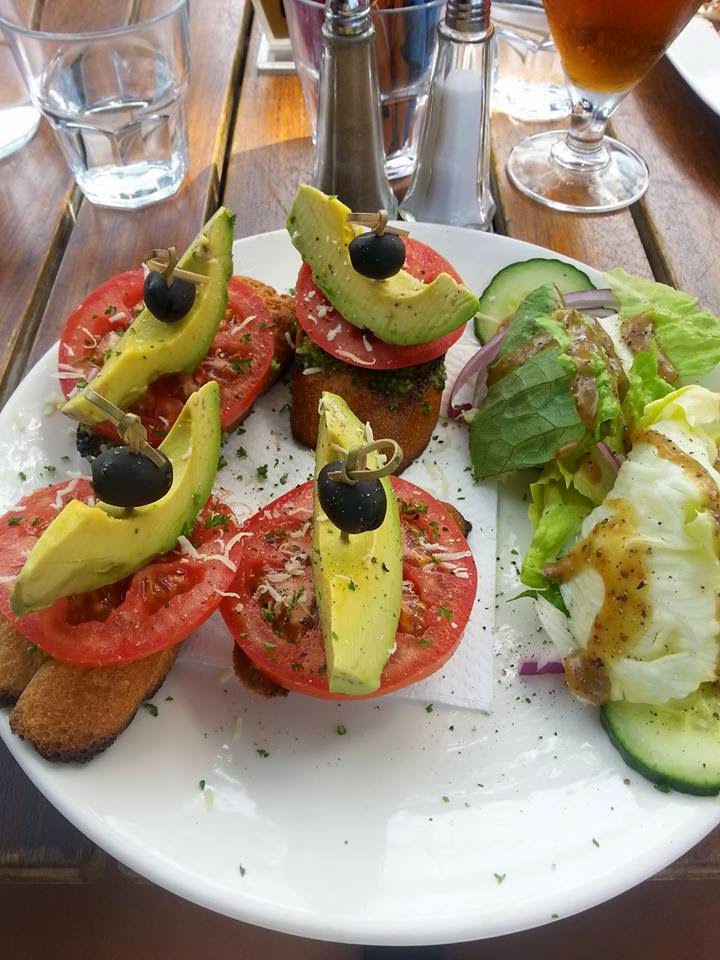 Ragazzi Takapuna is amazing; this was their take on bruschetta. The avocado, olives and juicy tomatoes on crisp bread accompanied with a side salad was top nosh.

So these are some of my absolute favourite NZ feasts - I sure will miss it!


There’s a little place in Takapuna that I’d been meaning to eat at for a while. My partner and I frequently head to Takapuna for the beautiful beach which boasts mythical views of Rangitoto Island, a dormant volcano teaming with wildlife and epic beach-side walkways that lead you across sand, grass and black rock paths. The heart of Takapuna itself is peppered with eateries, shops and bars rendering it the perfect marriage of nature and hedonism. Let’s just say, I like it here a lot and hunting out a new place to eat has become one of my favourite pastimes. I never used to be, but lately I’m a foodie.

Blunderbuss Pizza Vino did not catch my eye immediately. I remember first walking past it during the day, seeing it empty and being rather unimpressed with the decor. Let’s just say the theme of the place is...interesting.  I think I can even recall saying, “Who would eat here?” (Such a snob). The tables and chairs are numbered and look like donations from an old fashioned institute, the lights are creative and bizarre and the wall is decorated with posters and pictures epitomising the best of by-gone culture; there’s lots of pictures of Frank Sinatra, Marlon Brandon and James Bond and even Lady Gaga makes an appearance.

We walked on by and I didn’t think twice. A short while later, having just eaten elsewhere in Takapuna, we took a stroll down Hurstmere Road and stumbled across a variety of pizzerias (the place is heaving with them). This time Blunderbuss was PACKED to the rafters and table after table was teaming with heavenly, thin crusted pizzas that looked mouth-wateringly, lip smackingly good to the point where I wanted to smash through the glass of the establishment and snatch one of those heavenly pizzas from the hands of the smug diners enjoying their artful assortment of carefully crafted toppings.

Food has an immediate visual impact on me. I literally look at food and it has a pornographic influence. Despite the fact that we’d already eaten, I knew I wanted pizza! We didn’t actually end up eating at Blunderbuss until a short while later; Easter Monday to be precise. I realised upon entering that the reason why the front of the restaurant often seems barren is because the real action is in the back; there is plenty of outdoor seating available and often a live band or music playing. How could I have been so naive! It’s just like how all the fun happens at the back of the bus; none of the cool kids sit at the front in plain view.

A quick scan of the menu told me that one item would not be enough. Our quirky redheaded waitress had a few suggestions for us and seemed endlessly enthusiastic about the food which is always a positive sign; when the staff enjoys the dining, you know that it’s a promising venture.

My partner and I settled on the following items:

Let’s just say, my stomach was very pleased.
Can I also say, I absolutely love these bottles of water! I need to get some for my house.

I also love when sangria comes in a jar. This is another thing I need to start doing; saving and cleaning out jars to make unique little drink canisters. I’ve never tried prosecco sangria but I do like prosecco and sangria so unifying them didn’t seem to be a bad idea. My drink looked like a technicolour rainbow in a jar complete with two teeny tiny black straws and laden with lemon, raspberries and teeny tiny berries that I just couldn’t place. Rammed with ice, this creation was fruity, refreshing and had that gorgeous pop and tang that prosecco is so notorious for. Not enough to get drunk on, this little jar just got me into that happy, ‘sip of alcohol’ place that I needed to be in.

The baby back ribs were beautifully presented slathered in Jack Daniels BBQ sauce and topped with slaw. Unfortunately, the ribs were a little dry despite the fact that the meat was tasty and a little more sauce was needed to offset that dryness. The ribs were listed as a special and my boyfriend devoured these. For me, I wouldn’t be too fussed to re-order.

The real piece de resistance, the jewel in the crown, was of course the pizza. I’ve always loved margarita pizza; the simplicity and subtlety of the flavours always works well and delivers an ecstatic taste bud hit. I knew that the pizzas I had seen in the window looked divine and healthy, but I didn’t really think about how unusual and unique they truly would be. I have literally never eaten a pizza like this.

The base is constructed from semolina and manuka honey but there’s also a gluten free option that comes at a $2 surcharge fused from chickpeas and tapioca flour. The base of the pizza is very thin (typically I prefer thicker bases) but the flavour was not compromised whatsoever. First off the pizza was HUGE. I noticed most pizza sharing pizzas. My partner and I don’t quite work that way. We ordered one each. We are pigs...a little bit.

I was glad we did because I consumed the entire pizza in one sitting and could have eaten more if I didn’t have the ribs, fries and sangria to contend with. The burst of flavour could be tasted in the pillowy mozzarella which was not used to excess as is so often the case with pizzas. Now I’m a bit of a cheese fiend but I found that this was just the right amount of cheese. The basil and juicy, ripe tomatoes were absolutely gorgeous and the crust was just the right kind of crispy; enough to give you a crunch without deteriorating in your hands.
My partner’s pizza, the frutti de mare, was a decadent feast of mussels, salmon, prawns, squid, coriander and fried capers poised on a tomato base with no cheese. I’m not such a seafood fan so I passed on trying but he definitely enjoyed it.


The shoestring fries came well equipped with porcini salt, which sounds very Italian and the creamy deliciousness of a side of aioli (I literally had no idea what aioli was before I come to New Zealand) really finished them off well.
With our bellies full and the bill paid, I was so happy that we took the time to stop by her. The staff were lovely, the venue quirky and spacious with abundant outdoor room and the food was healthy, creative, filling, and tasty and well worth the price. I’m already badgering my boyfriend to go here again.
PS...not that it’s particularly relevant to your eating experience but Blunderbuss literally translates to mean:

1. historical
a short large-bored gun firing balls or slugs.
2. an action or way of doing something regarded as lacking in subtlety and precision.
"economists resort too quickly to the blunderbuss of regulation"